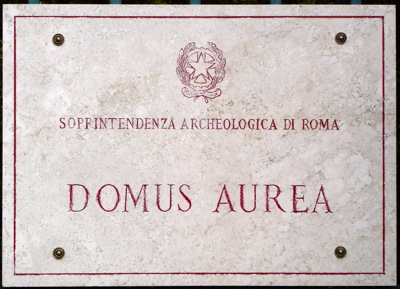 Anyone interested in art, architecture and Roman history should not miss an opportunity to see the Vatican Museum while in Rome.  But there is another ancient palace full of history and wonder: Nero’s Golden Palace, the Domus Aurea.  At the time of this writing, it is closed for further excavation and renovation, but keep watching, because when it does re-open, it is a spectacular visit.

The Domus Aurea, having arrived on the scene first (64 AD), was the emperor Nero’s summer palace on the hill overlooking the Colosseum. It lay buried under present day Rome until a few years ago when it was partially excavated. So far, about 35 of the rooms which have been uncovered, and all provide a good insight into what the palace looked like in Nero’s time. Since much of the palace is still buried, most of the windows and door openings are covered. Currently, the palace gives you the feeling of exploring a subterranean cave. However, the guide makes you aware of where the windows are and what the level of light and nature permeated the residence.

Art enthusiasts will be thrilled by the frescos that have been uncovered. Graffiti on the ceilings gives evidence to the fact that the Renaissance artists had found their way into the palace even though it had long been filled with earth. The artists were able to squeeze into the area between the ceiling and piled earth to view the classical frescos which then found their way into the art of the Renaissance. The colors and designs, particularly of the ceilings, are reflected in so many villas, palaces and country homes created from the Renaissance onward.

These are especially evident in one of the greatest art treasures of all time, the Vatican. A trip to the Vatican museums following or preceding the Domus Aurea dramatically demonstrates the strong link of the Renaissance artists to ancient Rome. The detailed paintings on walls and ceilings began long before the Vatican or any other palaces built AD had them. The colors and patterns were conceived centuries before and artistically copied by the Renaissance artists. And as you look out of the windows of the Vatican, your eye scans beautiful gardens, just as Nero’s guest would see as they looked out the windows of the Golden Palace. Here too, one sees the ancient tastes for architectural design reflected in the more modern palaces. Mosaics, statuary, color, fountains, gardens and design, all created centuries ago find timeless beauty in the work of the great masters of the Renaissance.

We have some great Vatican Tours, so skip the line, and book a tour of one of the world’s most historic sites today!